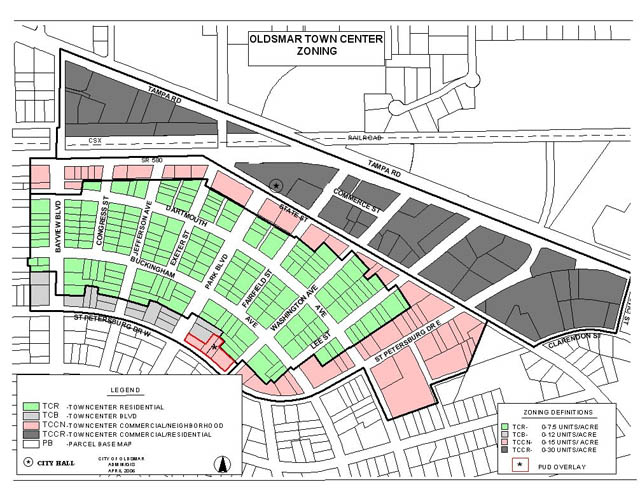 The primary function of the Agency is the redevelopment of a designated geographic area, also called the "Town Center."  This reporting period is the twenty-fifth year that funds have been budgeted.  The 2020-21 annual budget is $774,600. Current Ad Valorem taxes and PInellas County's aggregate share of the tax increment financing revenues have increased to a total of $726,100.

The Planning and Redevelopment Director performs the day-to-day administrative duties as the Director of the Agency under the general oversight and supervision of the City Manager, who is the registered agent for the Agency.

Additionally, F.S. 189.016 requires the governing body of the special district (Agency) adopt a budget by resolution each fiscal year and under F.S. 163.387 provide each year an independent financial audit of its trust fund to each taxing authority.  Based on this organization, the audit of the Agency's assets, liabilities, income, and expenses, is included with the City's Comprehensive Annual Financial Report (CAFR) for each fiscal year.  The fiscal year CAFR is normally completed and accepted by City Council at the beginning of April of each year.  A copy of this audit is made public and provided at that time to each taxing authority upon completion and acceptance.

Other supporting financial accounting data is part of this Annual Report.  Included are the Revenue Forecasting Methodology, Capital Outlay figures, and the annual line item budget for the Agency. The complete CRA Annual Report can be found in Appendix A.  A copy of this Annual Report, as well as all previous reports, can be obtained from the City's website, MyOldsmar.com, under Community Redevelopment Agency.

Kimley-Horn and Associates, Inc. was retained in 2017 to develop a Citywide Multimodal Transportation Plan to improve upon the connectivity around the City for all types of users.  The plan was completed and includes short term and long term strategies and priorities to address multiple modes of transportation which includes golf cart elements.

A Water Main Replacement project has been completed.

State Street Center was opened in October 2018 offering a variety of activities for all age groups, including hosting Live and Virtual health programs for City Employees and the community.

The following section of the report provides additional information and description about the above mentioned projects.

The City is actively pursuing the development of an eight  acre (mol), City-owned parcel in downtown Oldsmar, adjacent to City Hall, know as the Oldsmar Town Center.  The demolition of a City-owned building and vacation of the adjacent alley and right-of-way was completed as a preparation step for the upcoming development.

The design includes a City Plaza with a fountain. Although a City plaza or interactive public park would not generate additional Tax Increment Financing funds, it would benefit the residents of Oldsmar and provide a primary focus of the Oldsmar Town Center Project.

The City is also in negotiations for a potential Black Box Theatre, proposed as a redesign concept of one of the city owned buildings located  within the CRA area. This theatre will  provide a flexible performance space for a range of activities within the CRA  and include a simple design.  The Black Box Theatre is presented as an anchor for a larger proposed live-work/townhome project located next to the City Library.

The City was awarded a Complete Streets Grant for a portion of St. Petersburg Drive from Dartmouth Avenue to Bayview Boulevard. The City intends to improve this portion of St. Petersburg Drive by culverting existing drainage ditches, create a shared multimodal trail, and provide enhanced street crossings and intersections. Additionally, the area will be landscaped and pedestrian-scaled lighting will be installed. The project will continue what has already been completed in front of the Oldsmar Library and is in keeping with The Oldsmar Multimodal Transportation Plan.

Providing pedestrian-friendly connections, electric automobile charging stations, and frequent transit service will enable people to move easily within Oldsmar. Improving connectivity will also allow for easier and safer travel for all modes of transportation, including motorists, cyclists, transit users, pedestrians, and even golf cart users. Golf carts are permitted on City streets within the CRA.

The Downtown Water Main Replacement Project  was completed in the summer of 2020. This multi-year, multi-faceted project was constructed under budget at approximately $2.2 M. This project included the replacement of more than 18,000 linear feet of potable water piping, extension of 2,000 linear feet of reclaimed water service, replacement of 17 fire hydrants and installation of more than 250 water services with touch-read water meters.  The work has improved water pressure and quality in the downtown area.

In addition to the City seeking to develop City owned property in the CRA, a new Medical Office was constructed and Phase 1 of construction for an Accounting and Retail Services use  has begun in the downtown area. In addition, a Site Plan has been approved for new construction of a Medical Office along S.R. 580.

Two townhomes of an approved fifteen (15) unit townhome developments have been completed  and sold.

The City also issued several residential permits for the new single family homes located within the CRA in the last year. These homes feature architectural standards, they are consistent with the Town Center Code and are in compliance with the new FEMA flood maps and elevations.

A CRA Business Incentive Grant Program was designed to stimulate and leverage investment by businesses in certain areas of the CRA and is available for start-up costs or retrofitting interiors of existing structures.

Projects must represent permanent improvements that will remain despite lease terminations or sale of properties.  The City of Oldsmar will match 50% of the amount spent on materials only for improvements up to a maximum $5,000 match. Only one grant application was approved in 2013 for interior modifications of a new barber shop.

The Paint-Up, Fix-Up Grant Program has continued to assist property owners within the CRA to improve their home’s appearance. The program provides a 50% reimbursement of costs, up to $1,000 to qualified homeowners, that need to complete exterior beautification such as  exterior painting, home improvements, and hazard mitigation projects.

Since program implementation, 71 applications have been approved and over $46,521 has been distributed to homeowners in the CRA. Continued membership in the Florida Redevelopment Association provides resources for redevelopment efforts and access to other communities with CRAs.

All of these improvements, projects and activities that are discussed have been completed or are in the planning stages and are consistent with the parameters and intent of the Town Center Plan as adopted by the Agency.

smar CRA prevailed in 2020 through the COVID-19 Pandemic. Prior to mass closures, City Hall exhibited the Oldsmar in Focus gallery, showcasing work by local photographers of all things unique around the CRA and the City.

Although annual face-to-face events were sidelined, residents and businesses embraced new opportunities to help with those in need.  The Upper Tampa Bay Chamber of Commerce, housed in the Oldsmar Bank Building at the heart of the CRA, became a distribution point for free face masks. When recreational programs were sidelined, State Street Center evolved into a grab and go drive-thru site for elementary school children. Through a partnership with Feeding Tampa Bay, pre-package breakfast and lunch bags were provided to local families at the location when schools went virtual.

The Oldsmar Public Library was designated as the official Information Center, providing relevant information to callers seeking assistance for their household or business.  The popular Story Time with Mr. Anthony series turned into an animated video series through permission obtained from various publishing houses for authorized use of their materials. Take and Make Crafts were provided to Library patrons, who could follow instructions on a Facebook Live stream. Veterans Day was celebrated virtually with a live stream event in the Council Chamber, allowing the City to continue their homage to those who serve our nation. 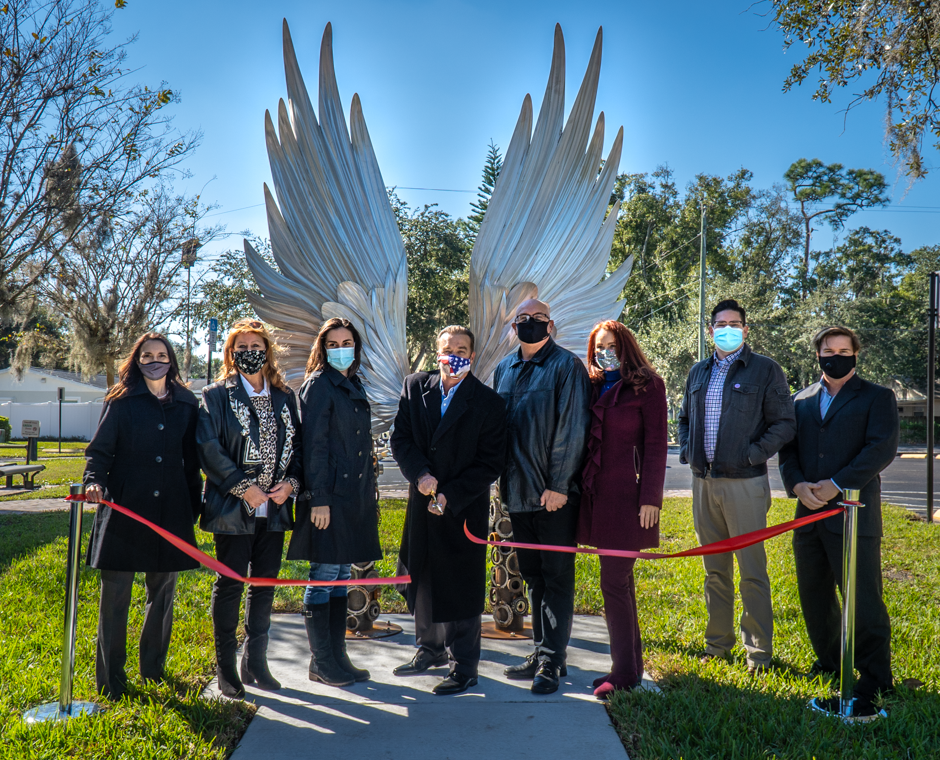 t addition to the CRA is ‘Taking Flight’, an interactive sculpture strategically located next to the Oldsmar Council Chamber. The pair of 12-foot tall wings are made of stainless steel, which visitors can ‘wear’ by standing in front of them.

The holiday season kicked off with a virtual Tree Lighting Ceremony at City Hall. The Facebook Live event featured holiday songs by a local singer and the Citizen of the Year continued the tradition of officially lighting the large Christmas Tree for the community to enjoy.  Golf cart owners were overjoyed at the opportunity to participate in the Holiday Golf Cart Parade. The long line of festively decorated entries meandered throughout the CRA, bringing joy and hope to all.

This is the twenty-fifth year that funds have been budgeted, and the total budget for the fund next year is $774,600.  Total Current Ad Valorem taxes and Pinellas County's aggregate share of the tax increment financing revenues have increased to a total of $726,100.

The purpose of detailing forecast methodologies for revenues is to determine the validity of the forecast over time and to utilize such information in making future forecasts.

The following are some assumptions concerning revenues which were made across all funds:

The following is information on a fund-by-fund basis for revenues forecasted in this budget document:

The City of Oldsmar utilizes a fund structure as outlined in the accounting regulations that govern units of local government.  A fund is a fiscal and accounting entity with a self-balancing set of accounts recording cash and other financial resources, together with all related liabilities and residual equities or balances and changes therein, which are segregated for the purpose of carrying on specific activities or attaining certain objectives in accordance with special regulations, restrictions, or limitations.  Funds are divided into various types according to the legal restrictions imposed upon them or the uses to which the funds may be utilized.  The breakdown of the City's fund structure is as follows:

I. Governmental Funds - Accounted for on a "spending" or "financial flow" measurement focus.  Accordingly, the budgeted fund balances provide an indicator of available, spendable, or appropriable resources.

a. General Fund - The general fund of a government unit serves as the primary reporting vehicle for current government operations. The general fund, by definition, accounts for all current financial resources not required by law or administrative action to be accounted for in another fund.

b. Special Revenue Funds - Account for the proceeds of revenue sources that are legally restricted by expenditure for specific purposes.  These are:

c. Debt Service Funds - Account for the accumulation of resources for payment of interest and principal on general long-term debt.

d. Capital Project Funds - Account for the accumulation of funds for the purpose of constructing major projects and improvements.